Even though Alyne is a relatively small organisation, we are subject to a surprisingly large range of targeted phishing attacks. Our customers trust highly sensitive data for processing in Alyne and it is our responsibility to be good custodians of that data - and trust.
Karl Viertel
almost 2 years ago
Covid19CyberCyber BasicsCyber SecurityCyber SecurityInformation SecurityIT-Security

For everyone at Alyne that means staying vigilant and making sure we are aware of these attempts. One way of keeping awareness high is to make unsuccessful phishing attempts public so others can see what these attacks look like and avoid safely in future.

I would like to showcase some of the attempts over the past few months in the following post.

In this post I am only analysing phishing attempts through email. While our app endpoint is of course exposed to the internet and therefore subject to many attacks, the security architecture - especially our CDN and minimised attack surface prevent these from being an issue.

Obviously we may not know the exact objectives of each attack, but given that these attacks are mostly performed at scale, we can get a general idea of the motivations behind the initiatives.

At this point I would like to share some of the semi-targeted attacks that we have documented over the past months: 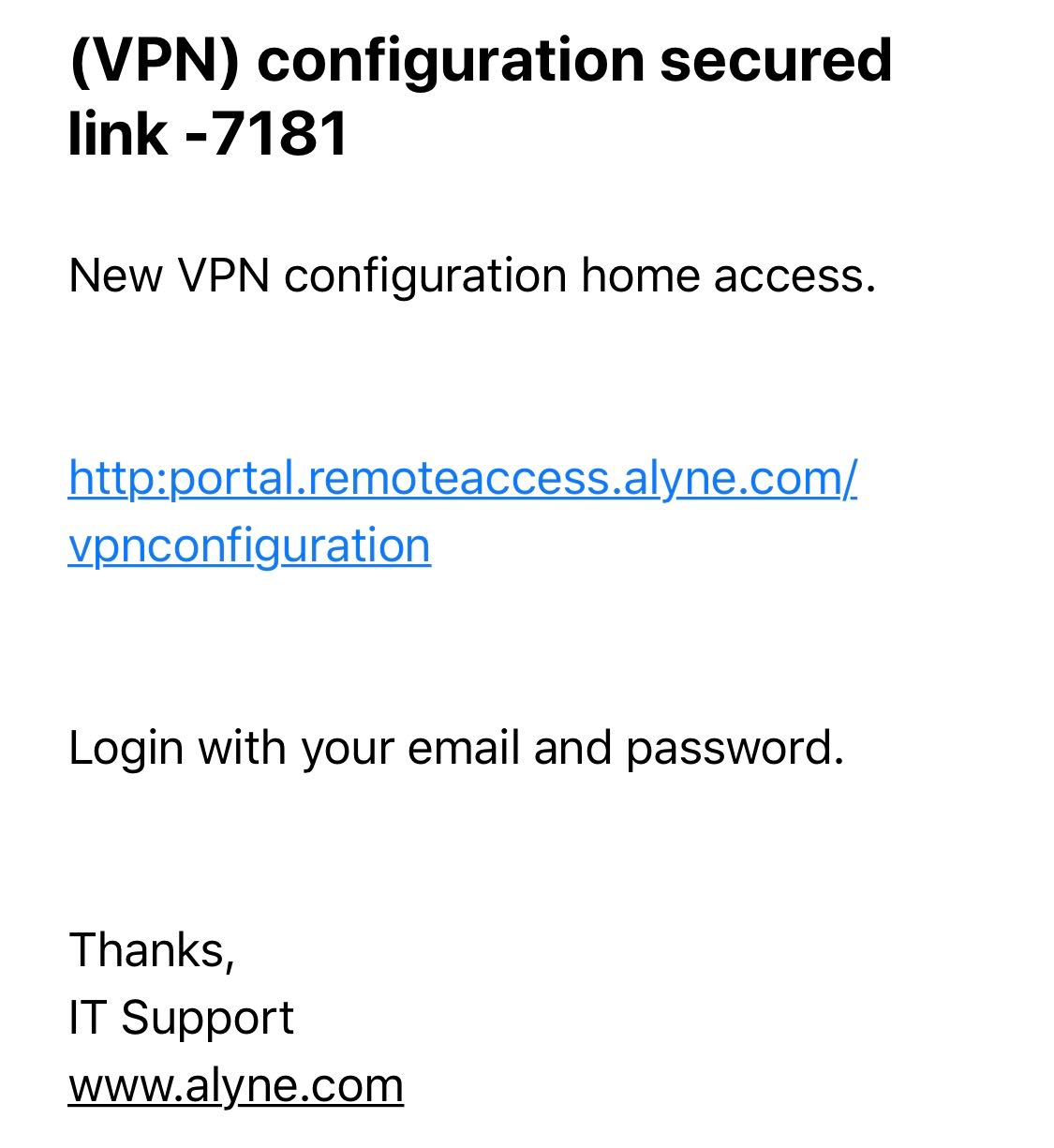 So what can we take away from these examples? Luckily, these attacks were not terribly sophisticated and were easy to detect. The focus or targeted nature of the attacks was slightly surprising, given we are not a huge organisation. I don’t believe all of this information can be collected 100% automated but requires some manual configuration to be executed. One very clear pattern was also targeting new joiners that may not be able to distinguish between the actual systems we use and fake phishing attacks. Generally these attacks are designed to work in big numbers with a low success rate, however the effort in configuring the attacks seems to be low enough so that it remains worth it. Using common SaaS tools (docusign, box, etc) as a scam vector shows how these attacks are evolving. Probably the smartest move was to use cloud file services to share files containing malicious content (i.e. OneDrive). This almost guarantees the email is delivered to the victim and passes through spam and malware filters undetected.

The most effective mitigation remains awareness within the team. We make this a topic regularly at all hands meetings, in our comms channels and during our onboarding. Keeping people sensitive to the threats of phishing is key.

At Alyne we use Google for Work and the associated email service. If you compare the interface of the “Change of Bank Account” example with the “Contact Detail Phishing” example, it is clear that using the Google Mail interface has some significant security advantages.

Finally we implore all of our employees to always perform a second channel confirmation if even the slightest of doubts exist. Our core communication platform is Slack. I tell employees that I will never ask them to do anything via email. If I ever do, always confirm on a second channel (phone, slack, in person).

2021 marks an incredible year for Alyne, now part of the Mitratech portfolio. The team invested a tremendous amount of effort and hard work to drive new growth, nurture opportunities, spark meaningful conversations, and incorporate powerful functionality into the platform. Take a look at our work, achievements and snapshots from the year.

Assessments are an essential tool for measuring compliance. Recently within Alyne, we have improved our capabilities to cover Multiple Maturity Models, which enables users to configure more than one maturity model in their organisation and measure compliance in the levels of their choice. Using this feature, teams can create and customise levels to their Controls, assess compliance across multiple maturity models, create Reports and leverage this functionality in Alyne's Continuous Controls.

Earlier this year, we were delighted to have the opportunity to be part of the in-person RiskNET Summit in Raubling, Germany. The team facilitated an interactive ESG benchmarking workshop with the candidates to assess their perceived maturity in various ESG topics. In this article, Alyne’s Head of Sales for DACH, Claudia Howe, shares the outcomes from the summit and the workshop.

Ransomware attacks in 2021 have become more sophisticated and disruptive than they have ever been. With this increase, it is imperative for business leaders to build up comprehensive defense against information security attacks by leveraging both mandatory and voluntary standards. In this article, Alyne Senior Consultant, Maximilian Millitzer elaborates on what business leaders should do to enable a quicker response, in the event of an information security incident.

Gearing Towards Greater Cyber Security Maturity in the Automotive Sector

The automotive industry is moving full speed ahead towards the software defined car and regulations and standards such as UN R155 and ISO/SAE 21434 have made it mandatory for businesses in the automotive industry to be compliant with cyber security management. Learn about Product Security Organisation Framework (PROOF), developed by Escrypt ad KPMG in partnership with Alyne's technology, and get the details on the upcoming workshop at escar (The world's leading automotive cyber security conference).