This past month, we shipped a variety of powerful new features including a brand new high-level feature: Continuous Controls. We also extended the capabilities of Alyne's Documents feature to now include 'Document Mappings' which harnesses machine learning for smart Control matching. In addition, read about Modifiable Library Controls and much more.
Eugene Nah
12 months ago
Continuous ControlscontrolsDocumentsObject LibraryObjectsalynenew featuresproduct features

This May, we introduced a series of powerful new capabilities to our platform.

We are very excited to introduce “Continuous Controls” - our brand new top-level feature! With this powerful new automation, Users will now be able to monitor and easily track the maturity deviation of their Controls over time.

Performing Assessments allows organisations to obtain a maturity snapshot of their existing Controls based on a defined benchmark. Running such Assessments in our platform can now automatically contribute to Continuous Controls and define maturity level instantly when the results are available. Additionally, we have also enriched our platform with third-party application support that helps transform insights from external sources into facts - further enhancing the Continuous Controls feature. This new high-level addition is a true value-injection into the functionality of Controls in Alyne. 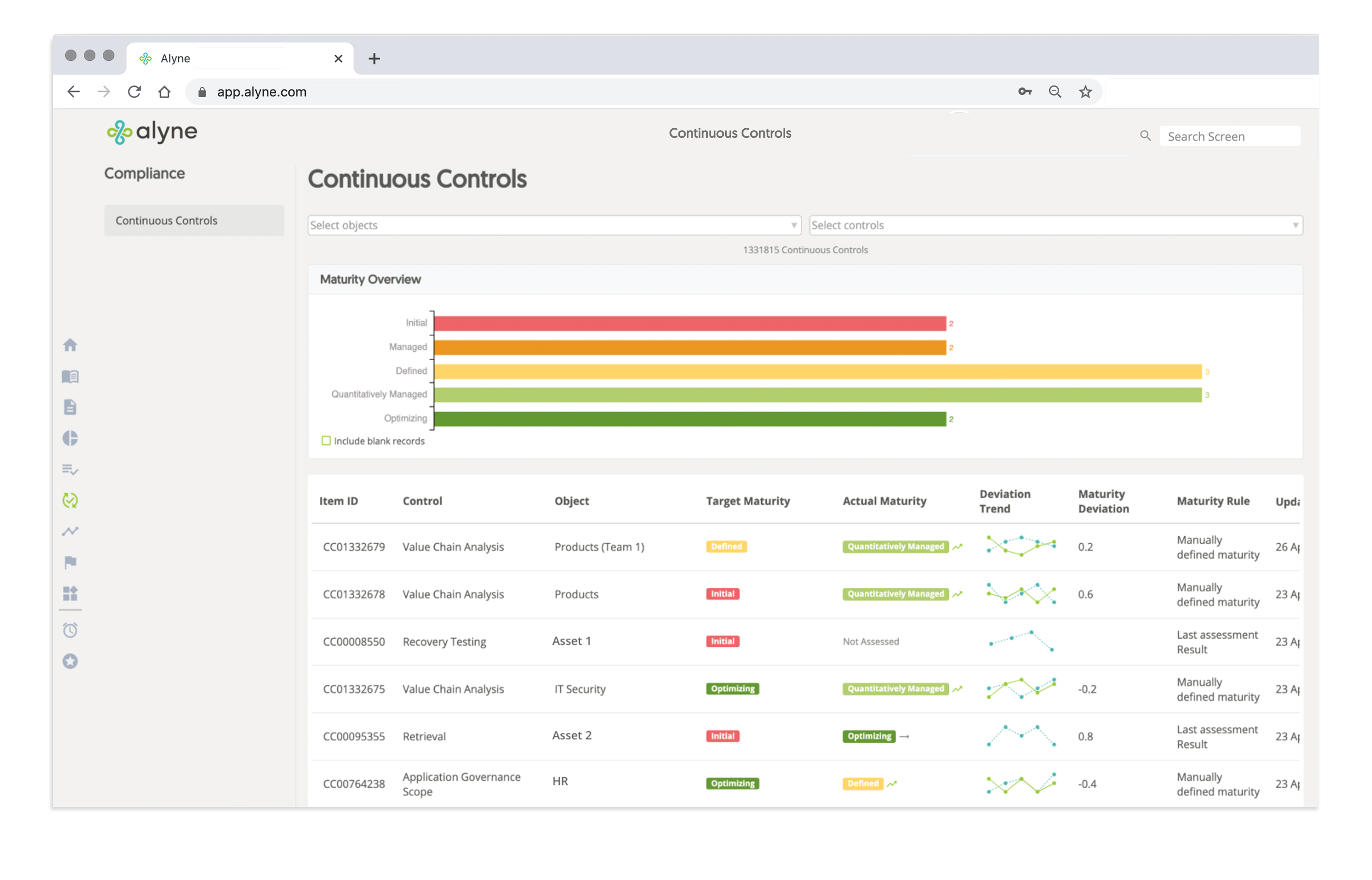 As an asset owner, you will now be able to track the maturity of a single Control across multiple Objects and analyse how they have changed over time. We couldn't be more excited about getting this major new functionality in your hands.

Earlier this year, we released a new feature called Documents, which provides an easy, convenient and maintainable way of integrating (policy) documents into the Alyne platform. We have since taken the feature forward and enhanced it with brand new Document Mapping capabilities.

As an Alyne User, you’ll likely already be familiar with the mappings of Alyne Controls to the various standards, laws and regulations within the Controls section. Going forward, harnessing the power of machine learning, Users can now create their own individual mappings of their Documents to derive their Controls through Alyne’s intelligent Control matching and suggestion capabilities. 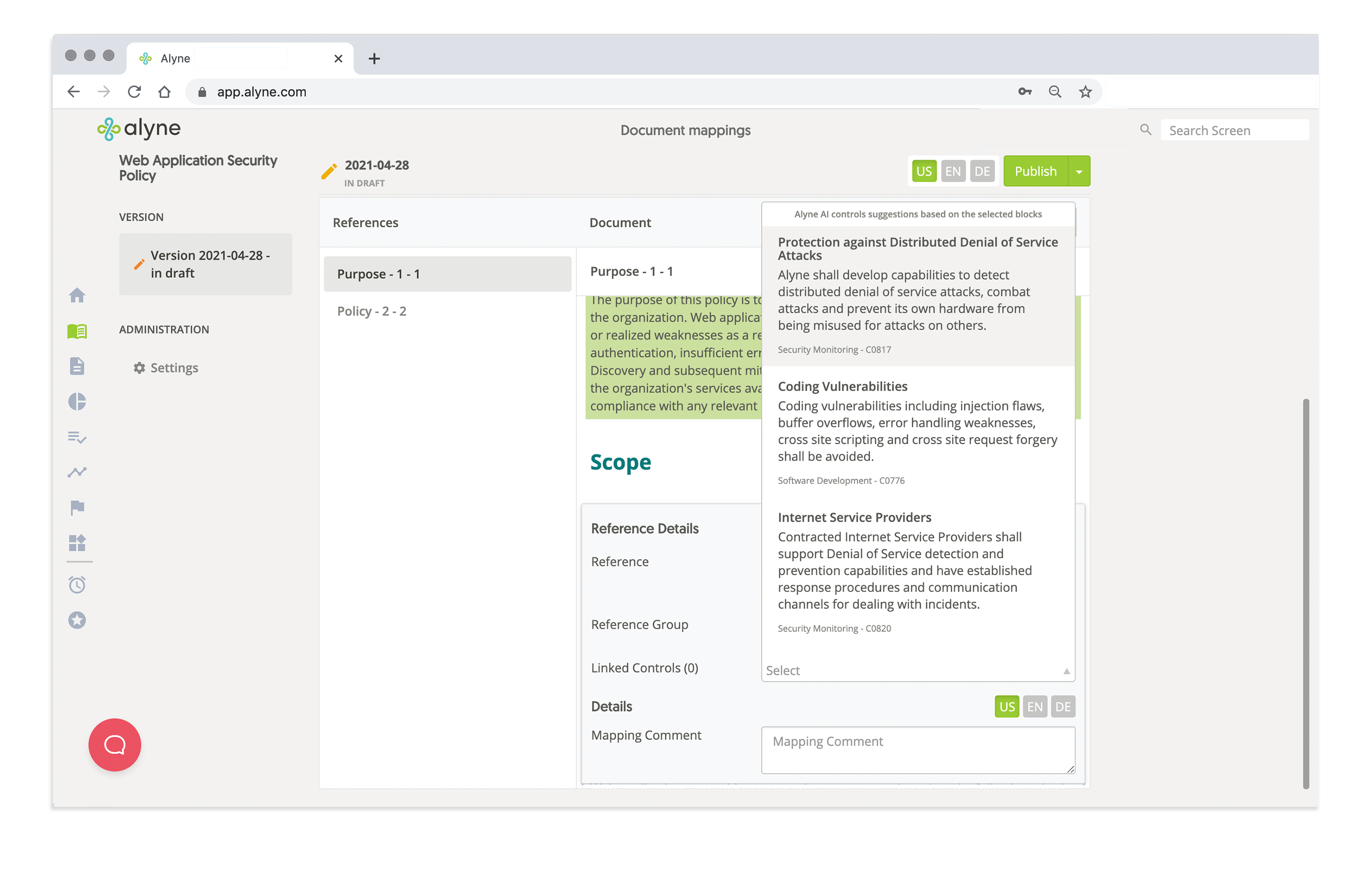 Furthermore, the full mapping between Controls and Documents also boasts the ability to indicate where references are presented on affected Controls. Creating targeted and easily actionable Controls relevant to your organisation has never been easier. This is the next major step for us in taking the Documents to the next level, making them more powerful than ever before.

At Alyne, we pride ourselves on the pre-defined 1200+ Library Control Statements that ship with our platform. Should there be a need for customisation, Users are also provided the capability to customise Alyne Controls to meet their organisational needs.

Moving forward, Users are able to modify any of Alyne's pre-defined Controls and maintain all customisations throughout new Library Updates that might affect their customised Control. Furthermore, at any point in time, Users have the ability to ‘Revert’ their individual changes, and are still able to keep the latest Library version available, whilst never losing customisations on their Controls. 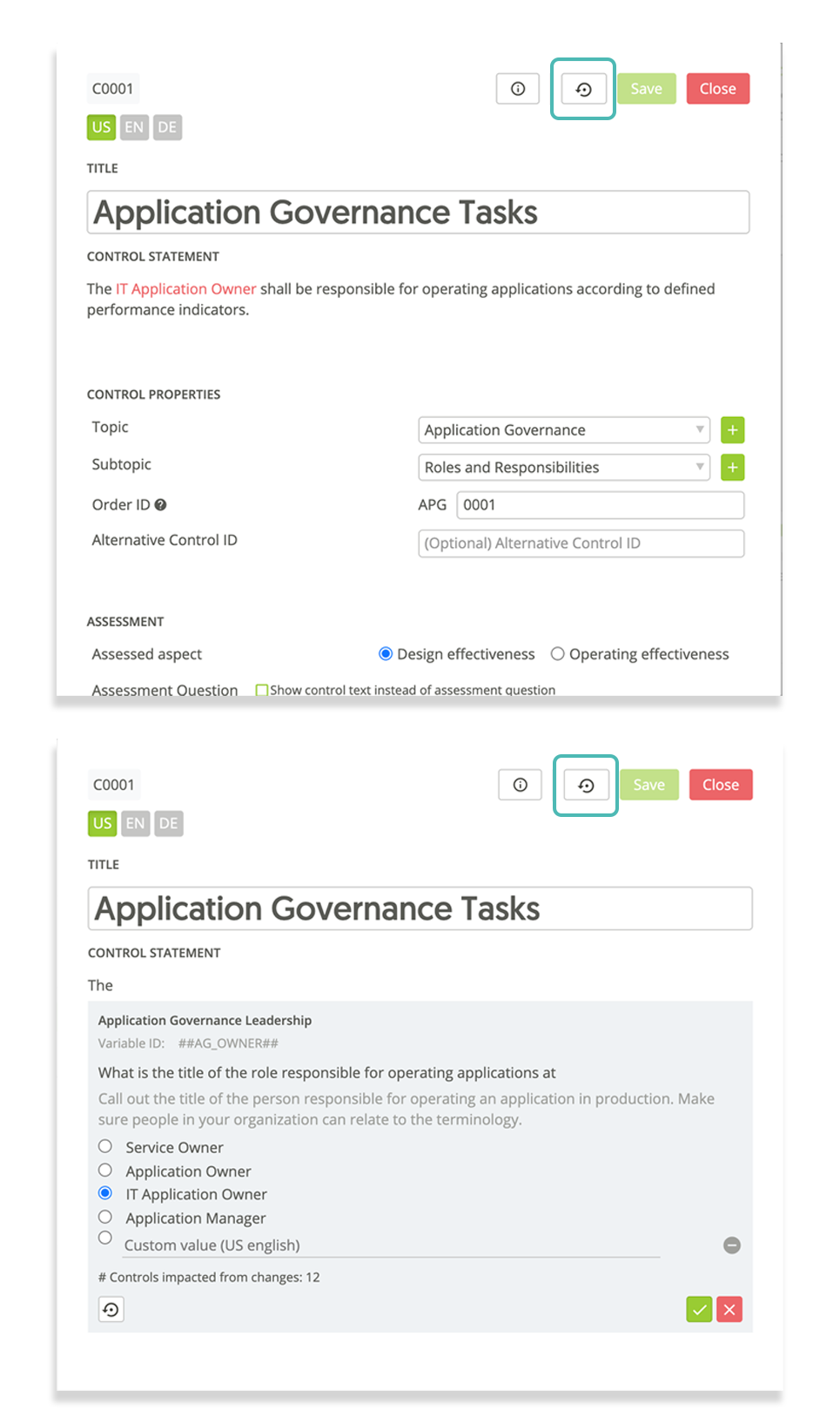 This feature provides even more freedom to the feature-rich world of Control creation, maintenance and management within Alyne.

Along with the transformation of our Object Library which provides a detailed and structured overview for each Object, we have also introduced the capability for Users to be able to include Attachments within individual Objects.

Have an upcoming pen-test that pertains to an IT asset? Simply attach it directly to the IT asset Object to obtain transparency on it. Attachments can also come in the form of a file or link. Additionally, you could also assign ownership to each Object.

We have also just shipped a stunning and highly interactive new table view in the Object world. Users now have the option to quickly switch between the tile view and the new table view. It allows filtering, re-ordering and sorting by the columns you are looking for. You can also add and remove columns with a single click based on your individual needs. Additionally, it allows automatic resizing and also horizontal scrolling. This new experience and interactive concept within the Object Library will soon be expanded to other areas of our application, such as Continuous Controls. 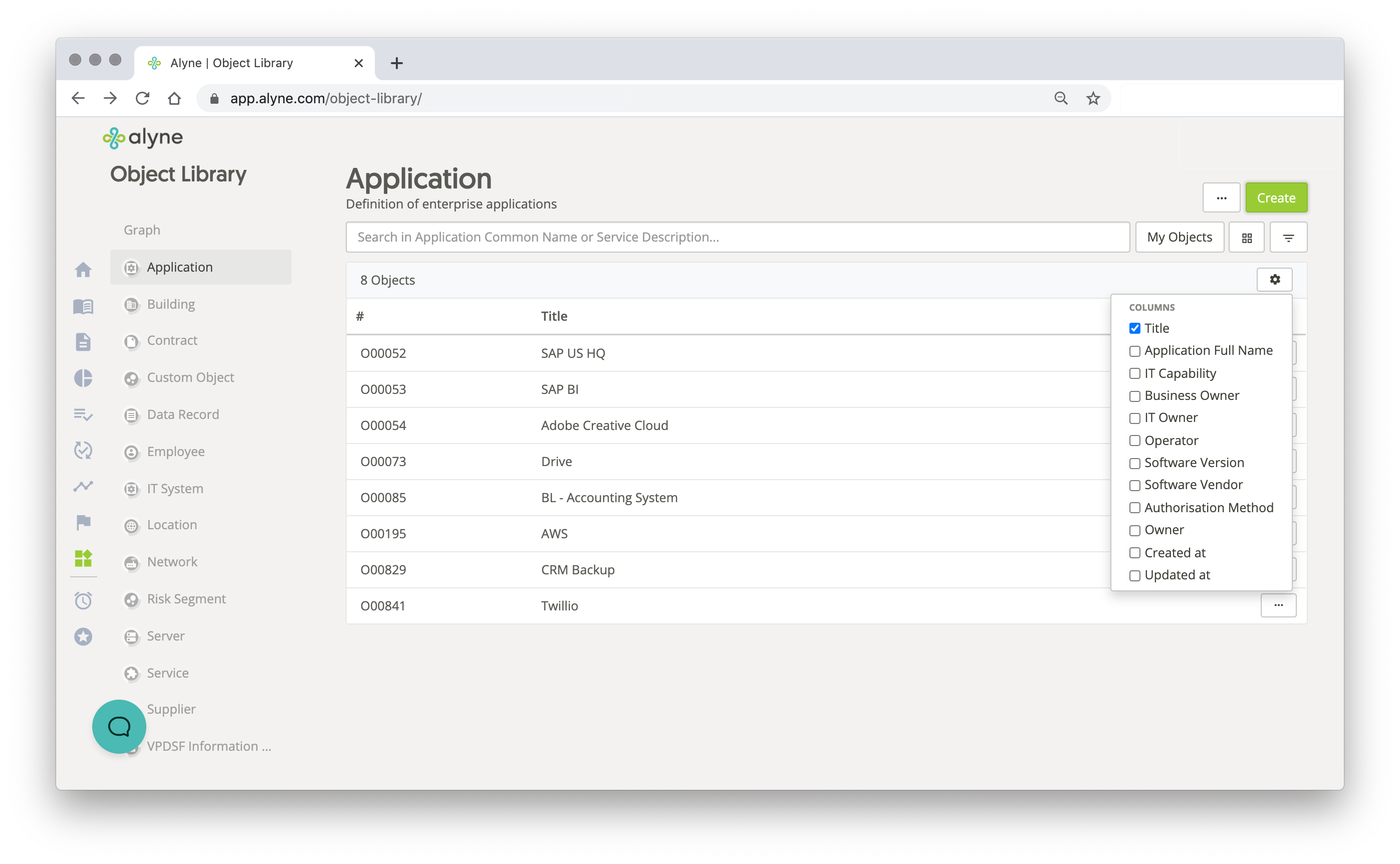 6. Deprecation of Support for Internet Explorer

Following Microsoft’s lifecycle policy on IE 11, we are deprecating support for our application running in Internet Explorer at the end of Q2 (June). This would allow us to consolidate our efforts and resources to better serve you. Going forward, we would recommend using Chrome, Microsoft Edge and/or Firefox when accessing Alyne.

Get in touch with our team to learn more about these new features and the extended functionality of Alyne.

This January, we have deployed various new features and enhancement that improve Assessment configuration capabilities; provide greater flexibility with on-the-go Object Type creation and management; the ability to create new and link existing risks from the Continuous Controls environment; and a new in-app Product Portal to obtain valuable Customer feedback and requests.

To close out a year of great achievements, Alyne Users will be able to benefit from powerful new Multiple Maturity Models, machine-learning capability that generates summaries for attachments, define granular access rights for Campaign Tasks as well as Objects, configure Repeated Campaigns, leverage Computed Object Properties for aggregated data, and configure Object Types on the go with the Custom Object Type Editor.

This November, our team added a number of fantastic new features to the Alyne platform. These include Multi-Level Hierarchies & Escalations for Tasks, Lifecycle Changes in Risk History, Advanced Beacon Settings, the Alyne Hook - which provides outgoing connectivity to other standardised systems in an event-driven manner - and Additional Filters and Sorting for Risks.

This October, Alyne Users will be able to enjoy both Risk and Mitigation Import and Export improvements, Object Versions where they are able to set approval processes and track changes to their assets, leverage Control Workbench Standards Filter to sieve out relevant Controls and much more.

As we close off the first half of the year, a fantastic range of new functionality has been introduced into the Alyne platform this June. Going forward, Alyne Users will benefit from an updated Risk Mitigation interface, improvements to the Continuous Controls functionality, be able to schedule Assessments in advance and leverage further NLP capability to define their Controls with Alyne's Document Mapping.

This February, we have provided Alyne Users with fresh lenses to visualise Assessment Container data, through the addition of 'Scope' and 'Insights.' Furthermore, we have included in-app Release Notes, enhanced our Risk Filtering capabilities, provided the ability to reassign Assessment Responders without losing any work, and introduced new Block Types to leverage within Alyne's Documents feature.